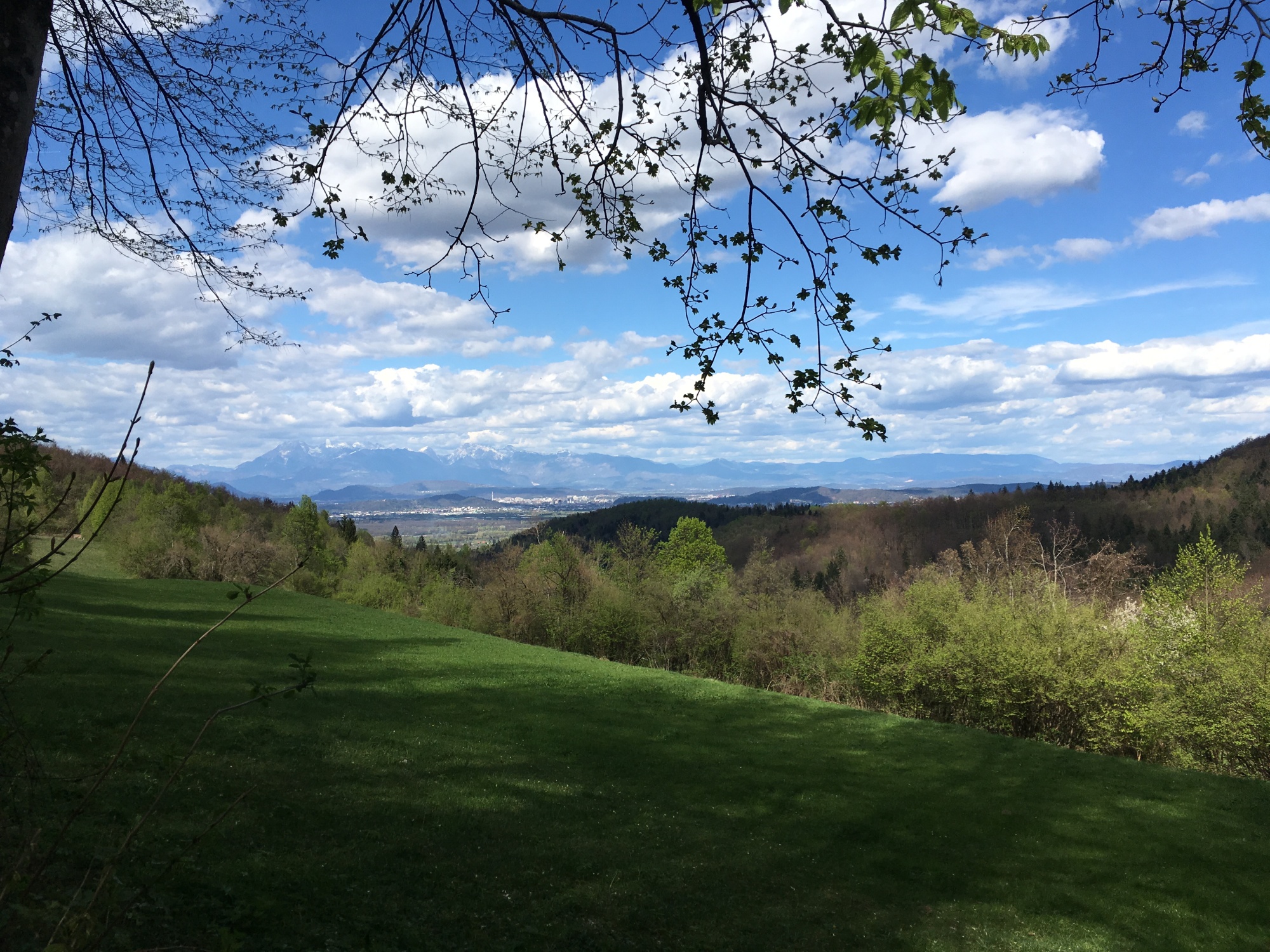 The man behind the counter smiled in surprise, shaking his head and sending shoulder length silver locks swaying across his face.  Years of sun had laid a crisscross map of wrinkles around his eyes.  He chuckled when I asked what was the best food they had for the day.

“There’s nothing for an American here!  We don’t have hamburgers, or hot dogs, or french fries…”

“No ja, zakaj pa sem v Sloveniji?”  // Of course not, what do you think I’m doing in Slovenia?

I was ready for some good mountain food.  The morning had started in a rush in a manner which would have made Peter Parker proud as I chased after the bus which would take me 10 kilometers outside of Ljubljana to the base of the 1107m mountain of Krim.  The bus only passed once every two hours, and I was determined not to miss my chance to hike.  Catching the driver just before he left from the next station, I boarded and sat down, only to panic two minutes later when the bus made an unfamiliar turn.  The driver just made a turn that I was certain wasn’t part of this bus route three months ago.  Could I be on the wrong bus?  I only had enough money on my card for one more bus trip.  If I got off and it was the right bus, I’d lose my chance to hike for the day.  I decided to ride it out and see where the route led.  Thankfully we soon began to pass the familiar signs of the path to Jezero.  Neighborhoods quickly faded into the distance and were replaced by the occasional house sitting along the edge of the road.  This is the only capital city I know where one can so easily escape the city for rural landscapes in just a ten minute drive.  The ten kilometer trip turned into a 30 minute drive as the bus became stuck behind a tractor, then behind bikers on the road who couldn’t be passed while traffic came from the other way.

Finally we pulled into the last stop on the route, Jezero.  I took a quick look at the time schedule.  “In two hours I’ll be back, don’t worry!” the bus driver commented as I turned around to start my trek.  We of course wouldn’t actually be seeing each other again, as I needed two hours just to get to the top of Krim.

The signs for the route started next to the bus stop.  Krim: 2:30 hours.  I followed a paved road passed a dozen houses along a street with no name.  The village is so small that the house addresses are just called Jesero 1, Jesero 2, Jesero 3, and so on.  Tractors sat in their barns, tucked away while their owners enjoyed the beautiful Saturday afternoon.

The path to Krim soon turned from paved road to rocky path just wide enough for a small car to traverse.  This part of the path led to a patch of land used for gardening.  An old man in a worn white shirt and suspenders moseyed the way to his car carrying the day’s vegetable pickings.  Here the path turned to the left and finally narrowed to a strip of walking space which wove its way through the forest.

Walking at a good clip, I made the climb to the top of Krim in just under two hours.  The path is almost entirely through forest, a forest which I was quite convinced had a canopy so thick that no sun would shine through.  This is at least how I remembered my first hike on this mountain back in January.  Thus I learned that it was not the trees keeping the sun at bay, but the clouds, and on this fine April day there was not a bit of white fluff in the sky.  I instead zig-zagged my way to the top while bathing in a brilliant spring sun.

The last twenty minutes of the hike were along a road which folks can take all the way from the base of the mountain to the top.  This makes Krim a popular destination for hikers as well as those looking for a view who have neither the time nor the motivation to actually hike.  The city and farm landscapes which span out in all directions from Krim do not disappoint.  Even the Kamnik-Savinje and part of the Julian Alps are visible in the distance.  There is no better way to enjoy this view, of course, than with a bite of traditional mountain  food, or perhaps a tea or shot to recharge the body at the top.

I received my food and carried the tray to a wooden table outside.  There was just one bench left, so I took my seat and tossed on a jacket for the cool breeze and dipped a bit of bread into my Krimski lomec.  The splendid warm blend of meat, barley, and potatoes was a satisfying end to a quick hike up the mountain.  Ready to start, I noticed that I had no spoon.  I headed back inside to ask if I might receive some silverware.

“You Americans!  Always causing trouble!”  The man behind the counter chuckled and went to grab from the kitchen a napkin with a spoon tucked neatly inside.

One thought on “na Krimu”