I arrive in Beograd (Belgrade), or Београд, late in the evening…at least it seems that way since the sun has been set for two hours.  Green Studio Hostel is the toughest thing to find.  I walk down the street, then up again, then back down, looking at empty storefronts between two buildings which I know box in the hostel, yet am totally lost.  Finally I spot in a window a small dark green piece of paper with the hostel name written in permanent marker.  Thank goodness, because I was really unsure of where else I would go!

Check-in takes a while, but finally I’m able to take my things upstairs and then join the folks downstairs for a welcome beer.  That’s where I learn lesson one: never join these guys for drinking unless you’re committed.  The hours begin to pass, the room begins to fill with people, and the beer is always flowing.  Serbian, Italian, Canadian, German, English, I learn that half the people that I talk to aren’t even there to stay: the hostel is just as much of a city hang out spot as it is a guesthouse.  When I finally muster up the will to say it’s time to go to bed at 5 in the morning, I make it only to the main floor before the group there stops me, saying I’ve got to join them for breakfast at the military hotel across the street and I’ll only have to wait one more hour.  When in Belgrade, right?

Just as they’ve promised, we head over at 6 in the morning to the Bristol Hotel across the street.  The old man dressed in a red tailcoat looks us up and down, staring scornfully at the disheveled group before him dressed mostly in jackets and sweatpants.  The guys order a cold beer before we even take a seat.

The room certainly draws the mind towards old times…the ceilings look to be six or seven meters tall, filled with decades-old felt furniture lightened only slightly from sunlight which peeks through the cracks of heavy curtains.  We all order omelettes (it’s the only thing available on the menu) and most people pull out a cigarette over breakfast.  I’ve quickly learned that I won’t escape cigarette smoke until I’m back to Ljubljana.

The day has a beautiful start.  Blue skies are much more inviting than the dark and cold weather which I encountered on my way in the night before.  The forecast predicts rain for the next couple of days, so instead of heading back to the hostel to sleep I strap on my boots and take to the city.  First stop is one of Belgrade’s most known spots, the Kalmegdan Fortress which oversees the convergence of the Sava and Danube rivers.  The place is quiet, and I spend a few minutes watching runners complete circuits below, moving at a seemingly impossibly slow pace from this distance.   Eventually it comes time to grab a bite to eat, and I am determined that my first meal be a good old Serbian burger.  Pljeskavica is a grilled patty made from beef, pork, and lamb.  It is found at plenty of corner shops for around 300 dinar, or three dollars.  Serbian meat is delicious, but it certainly leaves you dreaming of a salad for your next meal.  I also suggest pizza around Belgrade, definitely top notch sort-of-fast food.

I then try to make it back to the hostel to grab my list of things to see, but returning from a different direction from which I’d left turns out to be much harder than I had hoped.  I walk plenty of streets, passing markets and houses and buses, but eventually concede that the way home will remain a mystery without the help of the tourist office.  My next best option then becomes to roam the city, looking through its nooks and crannies before finally getting a map and heading home for the day.

I visit the St. Sava Temple and the Museum of Yugoslav History, but those two in addition to the fortress are the only real tourist attractions which I come across.  The National Museum and National Gallery have been closed for the past fifteen years, supposedly due to construction or something of the sort.  I do give the city credit for having more shoe stores than any other city I’ve seen.  Many buildings outside of the main street in the center look a bit haggard, no doubt from a recent tumultuous history of changing leadership and military engagement as the country transitioned into its own after Yugoslavia and faced a NATO bombing campaign in 1999 due to the country’s involvement in the Kosovo War.  Those buildings effected by the bombings stand as they were on the day they were hit, leaning over empty spaces where support beams and entire floors no longer exist.

Beyond the sightseeing, Belgrade is filled with people who thrive on being around others.  The people seem warm – they hold open doors, smile when they see each other, are kind and incredibly helpful if ever I have a question.  They seem to genuinely thrive on being around others.  I am of course also staying at one of the most social spots in the city.  Not once in the two weeks I am at the hostel does the music stop playing or the main entrance empty of people.

The second night ends up much like the first, making beer runs and staying up till 6 in the morning after an excruciating wait for potato soup to finish cooking.  My body is quickly adapting to late nights, loud music, and plenty of smoke.  Throughout my two weeks here, I end up managing to sleep before midnight about…once, I’d say.  Three or four in the morning seems to be more of the magic number.

By the third night one guy mentions that we have to spend some time outside of the hostel.  There must be more in Belgrade to see!  So our great hosts take us out to a bar to celebrate a hostel volunteer’s birthday.  For the little that Belgrade has in terms of normal tourism, all of its bars are effortlessly cool.  The place where we head is at the top flight of an old apartment building.  There’s no sign outside, just a button to buzz for entrance through the front doors.  At the top of the stairs we enter what used to be an old hostel, which is now converted into many rooms overstuffed with tables and chairs, a pool table, and a bar stocked with Zajačarsko beer and rakija.  These two are must-try local drinks if you’re in town (in addition, of course, to the 2L plastic bottles of beer simply named “pivo”).

Serbia also has some delicious food.  If you’re around, you’d better not leave before having a taste of of ajvar (red pepper spread) and kajmak (local cheese)!  The latter is a cheese so smooth you’d may as well use a butter knife on it.  If you’re looking for something more fresh, the Green Market is right up the street where every fruit, vegetable, and seed can be bought.  Just don’t try to buy things one at a time: I asked for three apples, and the lady kept saying “three kilo!”  In the end it was alright; I paid 50 cents what would cost me almost three dollars back home. 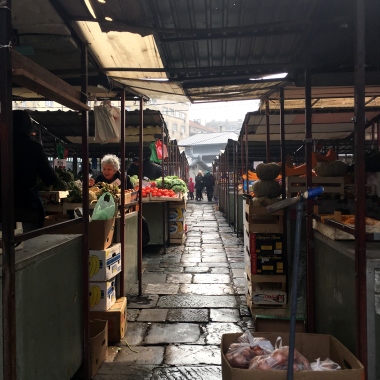 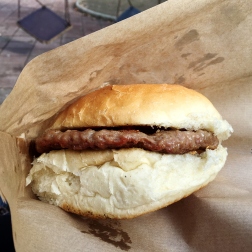 People I meet in Belgrade continuously try to convince me that I need to embrace life; that life is short and there is no time to be sad; that in being in Belgrade I shouldn’t worry about anything.  Time takes on a different meaning here, or perhaps that’s just the more relaxed take that people take to responsibility.  Have a bill that needs to be paid?  It was probably due three weeks ago.  Working tomorrow?  Call off the day, you’re still drinking at four in the morning.  Your train is leaving soon?  Don’t even try to fool yourself, you’re staying an extra week.

This last one is what they call the Belgrade Effect: no one who comes ever leaves on time.  I find myself sucked into this trap, extending my stay from three days to five, to seven, to eleven….then eventually give up on going anywhere else at all and resolve to spend my entire two weeks in Belgrade.  It is a similar story to many that walk through the hostel doors.  A hitchhiker adds two extra days.  An English volunteer stays two extra weeks.  The guy who owns the hostel came to stay for one month and just never went back home.  For all the chaos that is Belgrade, there is something that keeps people coming, and for some reason we’re all convinced to stay.